Veg patch pests that are really stressing me out 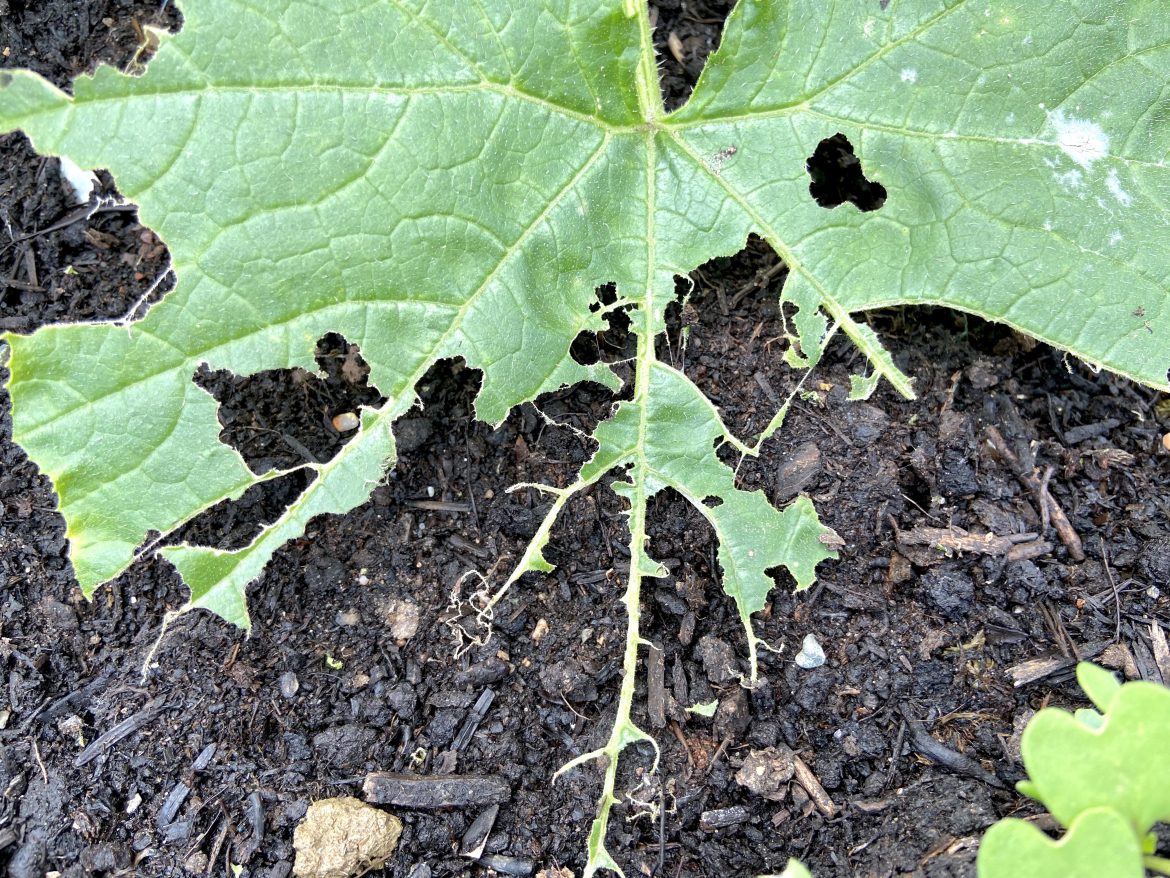 Growing your own vegetables is filled with satisfaction when you pick and harvest food, but the process is equally stressful for first time gardeners like us, and I’ll briefly touch on the pests that are currently causing me the greatest angst.

The first encounter we had with a potential headache on our new veg patch was with wireworms. To fight them in a sustainable and environmentally friendly manner we purchased nematodes, but we’ll only really know in October whether they were successful or not.

Frankly, the jury is out on this one because I pulled some radishes out this week, and came across a wireworm.

And it’s actually really, really sad to think that these little worms are causing damage to our tubers because the potato plants are looking glorious. They’re presently starting to flower, but we will be snipping them off because we want the tubers to develop. Let’s just hope the wireworms leave some potatoes for us to enjoy and don’t ruin them all.

Just as I was resigning myself to defeat against the diminutive wireworm, I took solace from the fact that our leafy vegetables growing above ground were doing exceptionally well.

Throughout May (the hottest and driest on record) we watered everything manually, and our veg was establishing and growing splendidly. The calendar flipped over into June, and we had a fortnight of cloudy, wet, humid weather which did wonders for the accelerated growth of our veg.

This weather, however, brought on an onslaught of slugs. We had back-to-back days of rain where we couldn’t inspect our raised beds, and during that 48-hour period the devastation the slugs caused was ridiculous as they decimated our pak choi and worked over our spinach and lettuce.

It took four days of hand picking to get rid of most of them. Nematodes are a potential consideration in the battle, but the Nemaslug product is not available in the UK until the end of June. We are really hoping it’ll be back in stock.

The slugs have even gone after rough courgette and pumpkin leaves, as well as our newly planted corn. Most annoyingly, they’ve destroyed one of my favorite cucamelon plants. That genuinely made me very, very angry.

If we are able to get our hands on it, it’ll be interesting to see if nematodes work, because they’ll be targeted on pests we can actually see.

There’s no respite. Last year our kale was attacked by caterpillars and I put a reminder in my iPhone calendar to be vigilant of butterflies.

And they’re out in huge numbers at the moment. I watched them while working on the patch today and they have a serious homing sensor. They flutter around ‘aimlessly’ giving the runner beans a pass, fly over the potatoes and zero in on our kale, brussel sprouts and broccoli.

So in the weeks ahead, I’ll be on butterfly egg and caterpillar watch. From last year’s experience this should be the easiest of the three pests to deal with. It’s just a matter of being watchful and picking off the caterpillars by hand.

This was last year’s pattern: the butterflies were out in late June (as they are now) and the kale was attacked in August. I’ll try and pre-empt any attack by getting rid of the eggs before they have a chance to hatch.

Try soft butterfly netting to protect your brassicas. It keeps the pigeons off too. We use it always. It needs to be supports by hoops away from the plants because, believe it or not, the butterflies will lay through the holes if they can reach the leaves. It saves a lot of time picking them off by hand and stops all the droppings falling down into the plant. I hate that.

We also use fine netting to keep carrot root fly off the carrots.

Thanks for the great advice Steve. I actually purchased 50m of fine netting this year to make some protective boxes, and I have a fair amount left over. The boxes were very handy for seedlings but they’re too short now for big bushes. I’ve got a dozen brussel sprouts that are massive, so that may have to be a hand picking job, but will definitely use the netting on the kale and smaller brassicas.

Touch wood, we’ve not had pigeon drama yet. What exactly do the pigeons do? Our bird life is bountiful and I was concerned about them going for my corn.

Not sure if you have a pond but I noticed that once ours was established and the frogs moved in then our slug count went down. I think it is important to encourage diverse habitats for natural predators to thrive. We have an abundance of lizards, slow worms and even snakes which I’m sure help to keep the pests at bay. And it has to be said that keeping a few messy overgrown corners in the garden provide an alternate target for the critters 🙂

We do have a pond, and it’s about 15m from our veg patch. We have many frogs and toads, but they don’t seem to be that interested in meandering across to the veg patch. Maybe it’s because we’ve placed bark chippings on our path ways. I’ve seen lizards and geckos, but they’re far smaller than the slugs, and we’ve definitely not got any snakes. Bummer. Our Nemaslug nematode has been dispatched today, so we’ll be applying it by the end of the week and it’ll be interesting to see what happens. I’ll let you know if it works.