Driving through waves of plastic pollution and litter in Shropshire 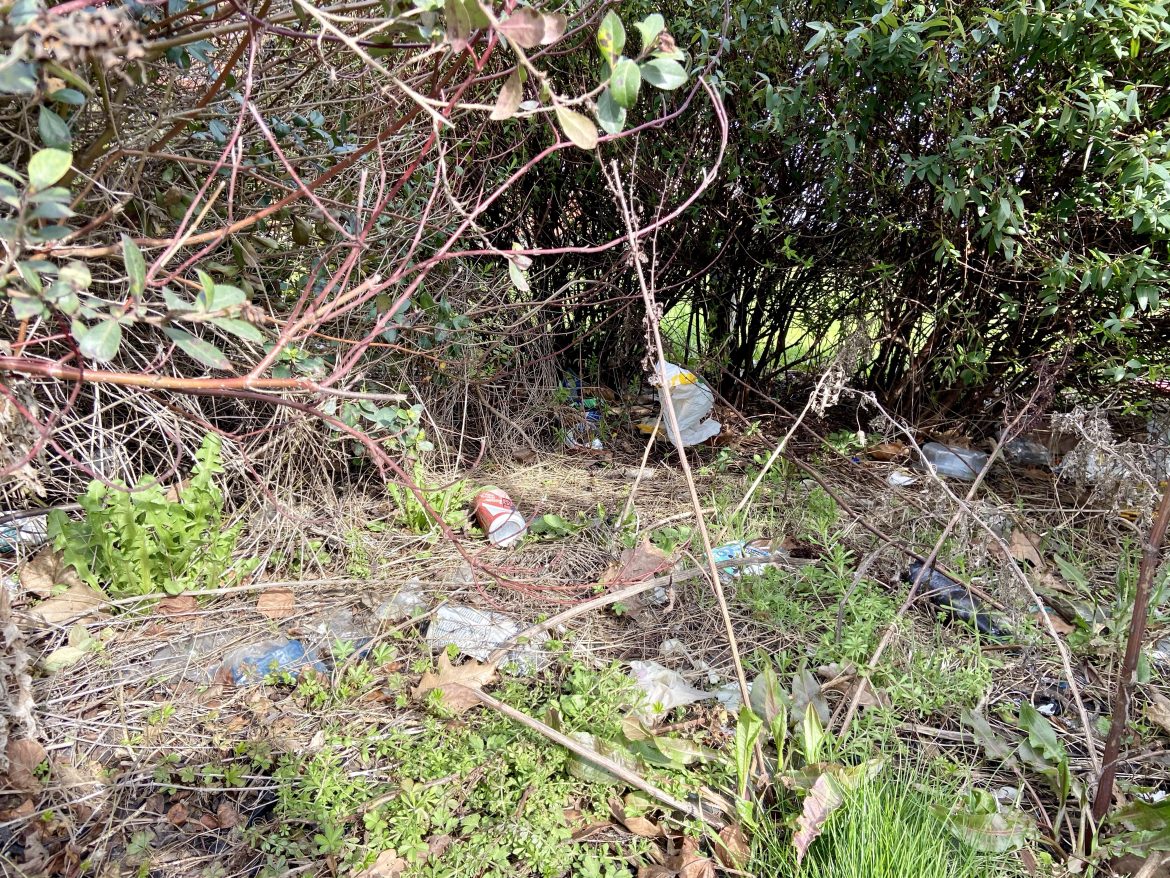 Earlier this week, we had to drive to Shrewsbury, Shropshire, because the MOT for our car was due. Because of all the lockdowns, we’ve not done a lot driving in the past 12 months, but we were mortified by the disgraceful amounts of plastic pollution and litter we saw on this trip.

For mile after mile, the roadside litter and rubbish simply did not stop. If you watch the video, which was captured by our dash cam, all the ‘stuff’ you see on the verges, banks and hedgerows are not flowers – that is all plastic, litter and filth. We’ve condensed this video to a few minutes, but if we ran the full footage, we’d have over 30 minutes of driving, consistently showing the same amounts of litter you see in this short clip.

This level of litter is not befitting of a first world country that has ramped up its fight against plastic pollution, and one has to seriously question what town councils are being paid to do and why they are not protecting the countryside.

During the summer, the lush British vegetation engulfs and hides this rubbish, but when everything dies back over the winter, the true horror is revealed. What makes it even worse, is that a lot of the large plastic rubbish we saw was now breaking up, and will be forming micro plastic pieces that will be detrimental to wildlife.

It’s devastating to think how this will harm badgers, voles, shrews, foxes, hedgehogs, rabbits and birds that have no choice but to wade through this litter, inevitably ingesting micro plastics.

It’s also equally shocking that the River Severn runs close to the roads that we drove on, and those plastics are inevitably ending up in major water courses and making their way across the country into the world’s seas and oceans.

But it didn’t stop on the bypass and access roads into town. We dropped the car off at the dealership, and walked across the road to Tesco, and the amount of rubbish that littered the roads and grass verges in Shrewsbury itself was equally appalling. Why is no one cleaning this up and how is it that we’re in 2021, with all the litter education campaigns, and people still deem it OK to litter?

With council taxes on the rise every year, we should all be demanding that this litter is cleaned up, and that strict fines are imposed on those that litter, because this is a problem that is well and truly out of control.

Please let us know if the litter where you reside in the UK is also a problem by leaving a comment below.

We live North of Shrewsbury and it’s a sad reflection of our country that most main roads even in a beautiful rural county like Shropshire are just covered in waste and filth. I recognise some of the roads you travelled on and they are horrific, my wife stopped at a layby there which is often used by trucks to park up overnight. She got out to put something in the bin and said the stench of urine just took your breath away, littered all around were plastic bottles of urine and bags of rubbish just tossed into the hedges. Just a mess, no idea why people won’t use bins, nothing other than sheer laziness.

Thanks for the comment Simon. We were really taken aback by what we saw, and it was just the consistent amount that shocked us. The centre and high streets of Shrewsbury are litter free, but why, as you’ve said, aren’t people using roadside bins.

Yep, we are in south Shropshire, the rural road we live near is always littered with energy drink cans and general rubbish. It’s really sad when we go on a litter pick to find dead shrews and mice stuck in the cans and bottles. 🙁
I’m not sure round here that’s it’s any worse that it’s always been, just with extra gloves and masks…
My hope is that the people who would normally be litter picking on roads have been busy working for the council in other ways and it’s not just been ignored but suspect that is wishful thinking.

It’s a sad state of affairs. We haven’t been to mainland Europe for years, and wonder whether they have similar issues with litter.

That is truly shocking. Can’t just rely on councils to clean up, people need educating to take responsibility. Not as bad as that here in rural Lincolnshire. However, definitely noticed more discarded litter on the rural paths since the explosion of local walkers over the course of the last year’s lockdowns. So it’s not just motorists!

Mars
Author
Reply to  Neil B

You’re right. We have public footpaths near us and we often pick up discard crisp packets and soft drink cans left by walkers. There’s really no excuse for it in my opinion.

Yes, it is terrible and a problem in many places. My parents in Northamptonshire are as horrified as you when they have to drive into town. Much of the rubbish has been there for over twelve months. Sadly this is beginning to become a problem in our part of Germany too, although Germany used to be praised for its tidiness. My partner and I cleared the verges of the main road where our drive starts earlier this week and like you say, it is often plastic that is already breaking up. But there were a lot of bottles, cans and coffee cups too. We had two large rubbish sacks and about 50 bottles from just about 100 metres road! We are trying to find out who to write to, but it is complicated to find the authority responsible… we have tried before and received no reply from our mails, but will persevere!

Wow, it’s crazy that this is also a problem in Germany (and probably throughout Europe too). I don’t understand why people think it’s OK to litter.

I’m afraid it’s everywhere. I live in a rural part of Scotland, near St Andrews. Every week, for the last four years I have been picking up the litter along the same two mile stretch of rural road (a single track road and not particularly heavily used by traffic). Although I’d like to place the blame just on the drivers (and particularly those drivers that drive without respect and due care around walkers and cyclists) I’m afraid that the culprits are even some cyclists and walkers themselves. There’s just this bloody-minded attitude that it’s ok to fling away everything and anything – and it’s someone else’s responsibility to pick it up. It’s dispiriting. You pick up the litter one week and it’s back the next week.

I don’t think it’s the same in all other countries. I know that in Germany for example, particularly Bavaria, there is no litter. Dropping litter there makes you a person non-grata. Cultural and social norms of responsibility and environmental stewardship are instilled in children at school and on into adulthood. Dropping litter becomes an offensive act and everyone seems to agree that it is offensive.
It is also the case that if you are seen to drop litter you will in no uncertain terms be told to pick it up – by another member of the public. In Scotland we follow a policy of ‘don’t get involved’. No-one would dare tell someone else what to do – imagining the torrent of abuse if they were to say anything. For a few years in the 1990s I chaired a community woodland group – which I privately renamed the ‘litter and dog poo’ group – because that it all that we ever seemed to talk about.
It’s a very long standing problem but my feeling is that, like so many other things, it begins with education and learning, too, what it means to take responsibility for our own actions. The environment needs to be treated with the same level of care and respect that we should be giving to each other as common inhabitants of planet earth. I know that Sir David Attenborough would agree with me!!

Sir David Attenborough would certainly agree with you, and the key word there is respect, and the lack of it when it comes to nature and for the planet.

Sky News had this huge anti-plastic campaign to rid the world’s oceans and seas of plastic, yet it begins in central, landlocked areas right here in the UK. As I mentioned in the post, the River Severn meanders past these roads and this plastic waste is inevitably going to make its way into the rivers and into the oceans. The same will apply elsewhere across the UK.

I wonder if you could put up something like a snow fence periodically accross the landscape and along rivers to capture the blowing trash? At least it would be accumulating in one area for clean up and maybe keep it out of the rivers.

That’s a terrific idea Gary. There’s probably a patent there that could make you very wealthy.

Yes, so sad. We have exactly the same problem here on the Isle of skye, and it’s heartbreaking. We have local beach cleans regularly organised by locals, and we have a recent initiative where locals adopt a length of road which they litter pick to keep clean. It all helps – but of course, it doesn’t address the root cause, which is people not caring where they dispose of their rubbish. They simply don’t get that there’s is no away ????

It’s unbelievable that even in remote places like the Isle of Skye people litter. I read an article recently that said that the plastic cycle has now progressed from making its way into our seas and oceans (where it has broken down into micro plastics) and these micro plastics have now entered into our precipitation systems; so it’s quite literally raining plastic, which everything (humans included) are ingesting.

Identifying damp issues and coming up with a plan

How we control our ASHP