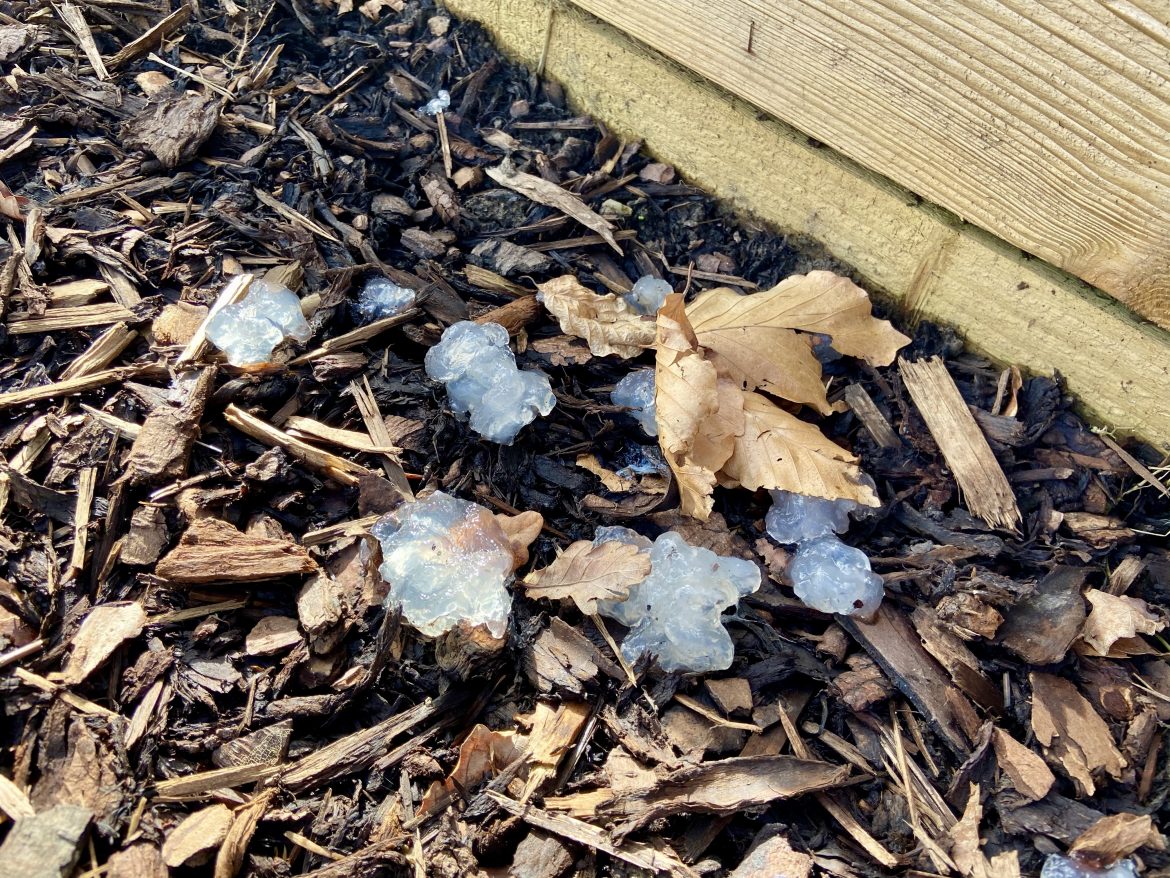 Our vegetable garden has been incredibly active so far this year, with moles, voles and other animals making their presence felt. As part of yesterday’s routine inspection I came across a curious substance on one of the wood-chipped pathways. Kirsten posted a video on Instagram, and through the magic of social media someone told us that this mystery substance is star jelly.

We googled it, and sure enough the picture matches the name. So I’ve spent the evening reading about star jelly, and here’s what I’ve found out. Before I start, check out the video below to see what star jelly looks like.

A post shared by My Home Farm – A simpler life (@my.home.farm.uk)

We start with Darwin. He believed that mushrooms started to grow where lightning struck, and the notion that mushrooms were spawned by lightning (or thunder as the Greeks and Romans held) was echoed in folklore linking fungi with meteors.

In a letter to Sir Hans Sloane of the Royal Society in 1733, a certain Mr. Crocker wrote that following the daytime sighting of a bright meteor, he searched for the place where he thought it had fallen, expecting to find “some of those jellies which are supposed to owe their beginnings to such meteors”.

He failed in his search for what was probably Tremella mesenterica, also known as yellow brain fungus, described in a British folklore society publication as, “a substance occasionally found after rain on rotten wood or fallen timber, in consistency and colour it is much like genuine butter. It is a gelatinous matter, supposed by country people to fall from the clouds. Hence its second popular name of ‘star jelly’.”

Elsewhere it was called ‘star shoot’. According to the Lincolnshire Folkloric Society this is ‘a gelatinous substance often found in the fields after a rain, and vulgarly supposed to be the remains of a meteor shot from the stars’.

There is also a lot of widespread European folk belief that jelly-like masses that appear on the ground after rain are the remains of shooting stars that have fallen to earth and, as such, possess special medicinal potency and properties.

Known as star shot, star jelly or star fall, these were most often either Nostoc commune, a member of the blue-green algae (or cyanobacteria) family that is fairly common in bare dry places or a gelatinous fungus of the genus Tremella, as alluded to earlier.

While there is reliable evidence that the latter has featured in British folk medicine, records attributable to Nostoc  commune are less certain. The most probable comes from Skye: ‘a jelly-like shiny stuff… a kind of lichen or mould which grew on the rocks at the burn mouth’. In accordance with a recipe passed down in one Skye family from a ‘wise woman’ ancestor, it was brewed (but not boiled) and given for puerperal fever.

Roy Bainton, in The Mammoth Book of Unexplained Phenomena: From bizarre biology to inexplicable astronomy, states that, “jelly falls are not as rare as we would imagine. Reports of rains of what’s become known as ‘star jelly’ abound. One theory on offer is that the substance is regurgitated frog or toad ovaries, vomited by buzzards or herons because it is indigestible. Other explanations refer to the remnants of meteor showers or even fungus.”

The buzzard and heron theory is extremely plausible in our case, as we have two visiting herons at the moment that feed at the pond (most likely on toads), and we have several buzzards that hunt in the field where our vegetable garden is located.

One thing is for certain though. We live on a wonderful planet, and there’s still so much we don’t know or understand. Who would have thought that the mystery substance we discovered could have either been vomited up by a buzzard after a bufo bufo buffet or that it was deposited next to the raised bed where we grew lettuce just a few months ago via a meteorite that has been hurtling through space.

So interesting! We have lots of strange patches of lichen and jelly fungus on the croft but I’ve not seen this one before! ????

They are strange and very interesting. Did you see the reference to Skye in the post?

Sprucing up the front porch with Zinsser