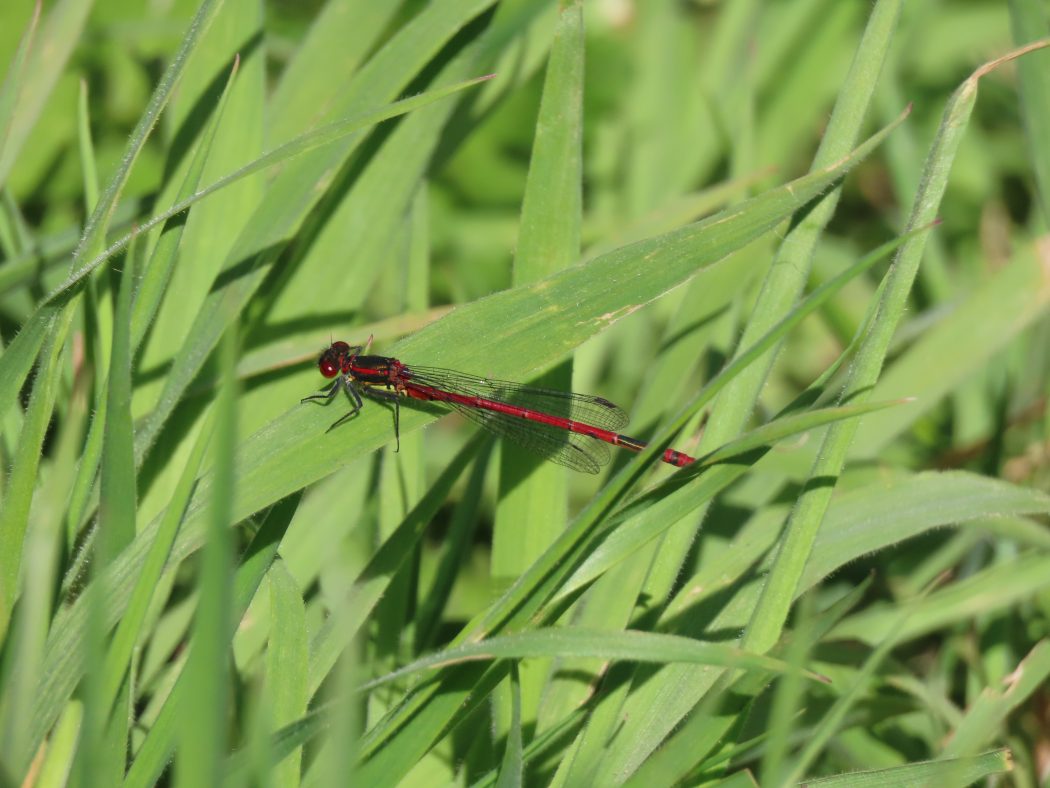 I came across this beautiful red damselfly in our garden this week. I initially thought it was a dragonfly, but the extremely helpful community at Gardner’s World informed me it was in fact a damselfly.

They really are quite exquisite, so I went through some books to find out more about these ancient creatures.

Coenagrionidae is the largest family of damselflies in Britain, containing all the common blue or red species. Pyrrhosoma nymphula (the red damselfly which I saw) are among the most frequently seen and widespread Odonata in the country.

Their nymphs are usually in still or slow water, amongst vegetation. This makes perfect sense as I was working in very close proximity to our pond, which is where I took the photos.

Facts about damselflies and dragonflies

Dragonflies are scientifically termed Odonata, which means ‘toothed ones’, referring to their strong mandibles. Most are fairly large insects, with long bodies, large eyes and four, straight membranous wings.

The Odonota is made up of two main groups: the true dragonflies (Anisoptero) and the more delicate damselflies (Zygoptero). True dragonflies are robust-looking and always hold their wings out to the side. Also, the forewings are differently shaped from the hind wings, which are much larger.

Damselflies are much finer in build, and most of them fold their
wings along their abdomens when at rest. The few that do rest with their wings outstretched are still easy to recognise by their long and very thin bodies. All four wings of damselflies are very
similar, unlike those of true dragonflies.

Nevertheless, in common parlance and for simplicity, ‘dragonflies’ is often used as an umbrella term for both damselflies and dragonflies.

Dragonflies are ancient insects, having changed little in the last 300 million years. During those early times they were masters of the air, long before birds and even before pterodactyls.

There are some remarkably well-preserved fossil dragonflies which have enabled paleontologists to piece together the past history of the group. Fossil wings are very informative and have emphasized just how conservative dragonflies have been as a group. This conservativeness is seen in the Emperor (Anax imperator), where fossils five million years old are clearly the same species.

Today, there are about 6,000 species throughout the world residing everywhere except in the polar regions.

Buying nematodes for the first time

The importance of soil