Most of our vegetable seedlings have been planted 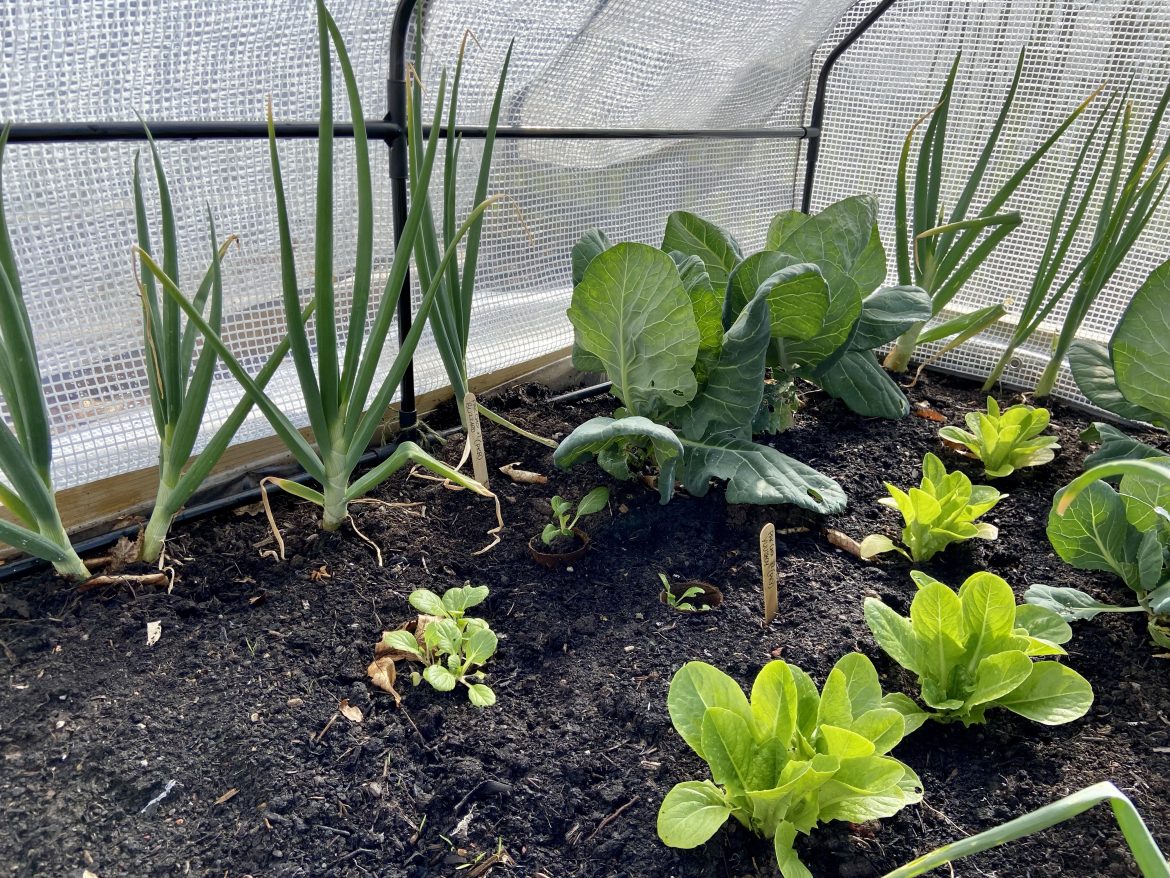 Today, we finished transferring the majority of our seedlings into our raised beds in the vegetable garden, with the exception of the tomatoes, cucumbers, beans and courgettes that we’ve left in the safety and warmth of our studio because they are susceptible to frost. Given how unsettled the weather has been, we may have to wait till late May before we consider moving and planting the remaining veg. There are a few seedlings that are not frost hardy, so we’ve covered them with protective bins overnight to help them establish and acclimatise or they’ve been planted in the grow tunnels.

We mentioned in an earlier post that this year we seeded all our veg in coir and wood pulp fibre pots. For the most part they’ve been really great, although they did need quite a lot of watering because the wood fibre pots in particular dried out quite quickly.

What has been extremely handy about the fibre pots is that we still have a few voles occasionally rummaging through our raised beds and we’ve found the odd small fibre pot pushed up (as shown in the image below). If those had been seedlings planted into the ground they would no doubt have been damaged, but with the wood fibre pots you just dig them back into the soil, which is very handy, and hopefully by the time that the pots start to degrade, the seedlings will have established root systems that won’t be affected by the voles.

All in all, we’ve planted out well over 100 seedlings and I always love this stage of the process because everything looks so tiny and the beds looks so empty, and within weeks everything transforms and before you know it everything is green and thriving.

Now that 85% of what we’ll be growing is in the ground let’s have a quick run through of our vegetable selection for 2021. We are growing garlic (four different varieties), onions, shallots, radishes, carrots, Brussel sprouts, purple sprouting broccoli, cabbage, kale (several varieties), pak choi, peas, tomatoes (six varieties), berlotti beans, cucumbers (two varieties), courgette, chard, lettuce (five varieties if memory serves me correctly), rocket, spinach, leeks, potatoes (two varieties), celeriac, mizuna waido, celery, spinach beet and asparagus (in for its first season, so we’ll have to wait three years before we can enjoy it). All of these vegetables are grown inside the vegetable garden or along its border.

This year we are also expanding beyond the raised beds and we’ll have several patches (in reclaimed portions of our field) where we’ll be growing sweet corn, pumpkins, squash and gourd (for Kirsten’s autumn decorations).

[…] Most of our vegetable seedlings have been planted […]

Best of luck for a good growing season! We are a few weeks behind at 57 degrees north, with frosty nights still, but I’m hoping to get seedlings out over the next few weeks. ????

We’re excited about the season ahead, and hopefully the voles won’t be disruptive. The key with the seedlings is not rush it when you’re frost danger zones as you guys will be. Your seedlings were looking great under the blue light – ours needed to move to accelerate their development. Things like the kale and leeks responded almost instantly.