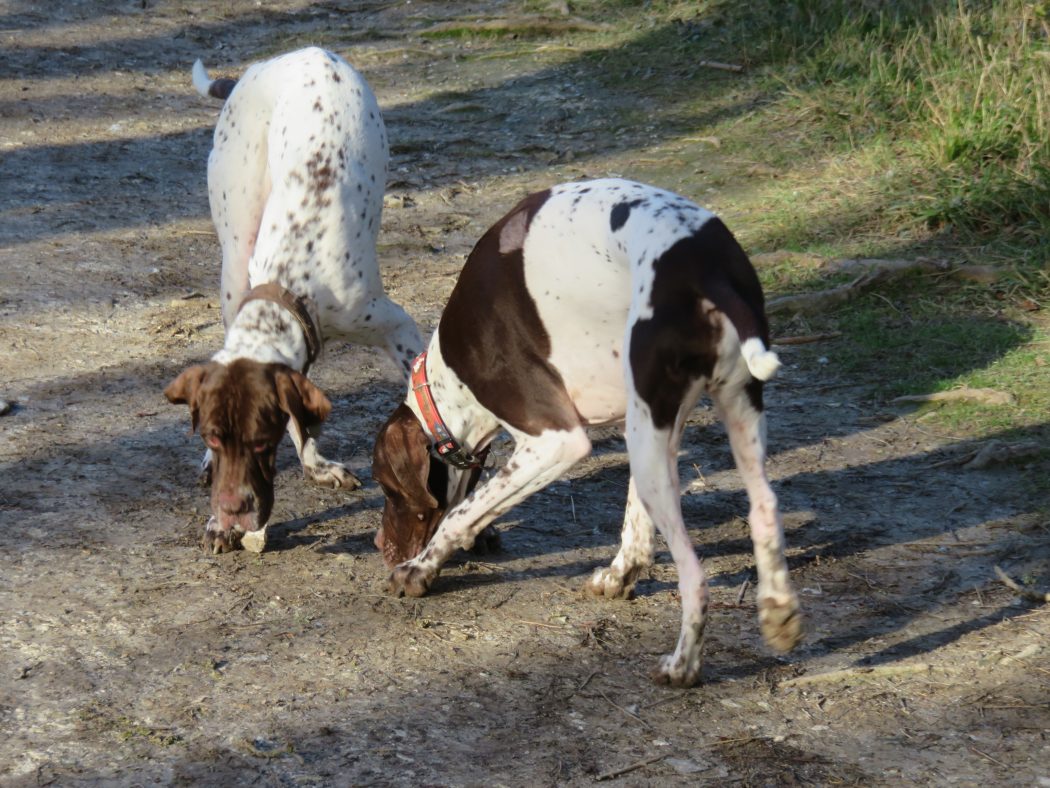 The back of our property looks out onto privately owned farmland with several public rights of way running across them. The farmer, to earn extra cash, rents out his field regularly to hunters that want to shoot pheasant and other animals. This has posed some questions about hunting on public footpaths.

Recently, during a hunt, we saw a couple walking their dog on a public right of way (PRoW) and this raised safety concerns about the walkers and their pet. I contacted the Rights of Way department at Countryside Services to find out what the rules and regulations were, and the answer is not as clearcut as I’d thought or hoped.

It was explained to me that a land owner (including a tenant) has the right to carry out various activities on their land, which includes hunting and shooting. There may also be sporting rights on a piece of land owned by someone else or that the landowner has given permission for sport to take place. Any person engaging in shooting activities will need a valid firearms licence.

The question we’ve raised pertaining to the couple and their dog focuses on what laws may constrain hunting activities when it comes to PRoW and public access.

First and foremost, public rights of way are recognised as a public space, which means that any activity on or within the vicinity needs to be taken into account.

What’s interesting is that shooting on or close to a PRoW is not an offence, but it may be considered a nuisance under common law, wilful obstruction of the highway, intimidation/harassment, or a breach of health and safety regulation.

Hunting on public footpaths – what you need to know

It basically comes down to the circumstances of each individual case. The Rights of Way officer we spoke to went on to clarify these key points:

As an additional point, is also an offence for a person without lawful authority or excuse to discharge a firearm within 15 metres (50 feet) of the centre of “any (public) highway which comprises a carriageway that is a highway, other than a cycle track, over which the public have a right of way for the passage of vehicles. Two categories of PRoW that are considered carriageways are restricted byways and Byways Open to All Traffic (BOATs)”.

Shooting and hunting of specified animals and birds is limited to certain times of the year under the Wildlife and Countryside Act 1981. From the daily gunfire that has echoed up and down our valley for the past few months, it’s surprising there are any pheasants left at all.

So what does it all boil down to?

Taking the numerous points above into consideration, authorities that administer the law and regulations have to consider what is proportional and reasonable when investigating reports about an incident involving shooting on or near a PRoW.

In the case cited at the outset of this post, there were hunters shooting near a PRoW. The factors that have to be taken into account are whether the hunting party was behaving in a reasonable manner? Were they aware of the couple and their dog? Was the couple put in danger at any time by the shooting party?

If something had gone wrong and someone was hurt, the investigating authority would need to consider whether any wrongdoing actually took place. If so, how can it be proved?

On many levels, I find this disconcerting. As I watched from my window, the hunting party consisted of 6-7 men, and they didn’t appear to be aware of the couple. The dog was also running ahead of the couple, and could easily have been put in danger if it had sprung from the brush and been mistaken by a hunter as a fox or another animal.

If someone had been inadvertently shot, I’m not sure how you could prove negligence on the part of the hunting party.

It’s one of those scenarios where the hunters are the ones with the guns, and if they inflict any accidental harm on a member of the public it’ll be very difficult to prove they’ve been negligent in any way, especially if they’re hunting on ‘quiet’, less popular footpaths.

The couple did finally identify that there was a hunt after several shots were fired (thankfully not in their direction) and they veered off to avoid contact with the hunters. A shrewd move, and on this occasion there wasn’t any unfortunate incident.

What happens in the event of an incident

But what if there was an incident, or an unpleasant encounter between walker and hunter?

Well, the investigating authority would need consider both parties’ position. Does one party have higher (more) rights than the other?

If the couple and their dog hadn’t veered off or could not proceed on their walk because of the justifiably perceived danger could that be interpreted as an act preventing them from exercising their rights and could that in turn be considered unlawful-wilful obstruction?

I would suggest the answer is yes.

The Rights of Way officer highlighted that people exercising their rights on PRoW or a public road are often asked to wait due to health and safety reasons whether that be the movement of heavy equipment or vehicles, so is it unreasonable to ask them to stop while the hunt takes place?

This naturally raises more questions. If it is reasonable to stop walkers, when does the waiting time become unreasonable – 10 minutes? 30 minutes? An hour?

Unless the PRoW is legally closed, then the walkers have a right to use their rights despite being asked to stop, however, they could endanger themselves; the liability in the event of an accident would be with the shooting party. But you’d still have to prove wrongdoing, and in a rural environment that may not be so easy.

The shooting party, having a duty of care, will have stopped the walking group with the best of intentions but one could question whether it is best practice or even lawful?

The British Association for Shooting and Conservation (BASC) has issued guidance to its members in relation to shooting over rights of way which reads:

“If a member of the public is using a right of way that crosses or is in the vicinity of your shoot/drive that is being driven, the member of the public has the right to pass and re pass over the right of way. Therefore any shooting should be refrained from until they are at a distance where your activity should not cause any concern. This is particularly important if a bridleway is in use and a horse rider could be injured or endangered”.

If a walker decides to carry on despite being asked not to, they might wish to consider their own motivation for doing so. If it is merely to exercise their right then that is one thing. If it is to protest at countryside sport or to hinder hunting activities, then they may be committing an offence themselves.

For more general information on shooting in the countryside, the League against Cruel Sports has created a guide to the legal rights of those affected by shooting. The guide is factual, not a campaign document, and details the different aspects of law about shooting including dates on shooting seasons.

I hope that this post has provided some additional insights into hunting on public footpaths.

I would like to thank Rights of Way, Countryside Services, for taking the time explain the implications of hunting on public footpaths in the UK, and we hope that the information provided here will empower you should come across a hunting group when you are on a PRoW.

We have farmers shooting next to our property, over public footpaths, over and next to the road tht leads to our house. It is so frustrating as i have never been able to get to the bottom of it all. We complained once as i was injured in the side of my face by falling shot when walking to my car on our drive way, but all that happened was the police said they couldnt do anything as they hadnt seen it and the farmer came up to our front door with his entire shooting party and they all started being verbally aggressive towards me. Now when they shoot, i have to get the children and animals inside so that they are not hurt which is unfair on them as it mens that alot of the time they are not allowed in their own gardens! I wish the uk guidelines were firmer and protected the general public more, especially when the farmer has acres of land to shoot on, but they choose to do it right next to our house.