Our chimneys have been swept 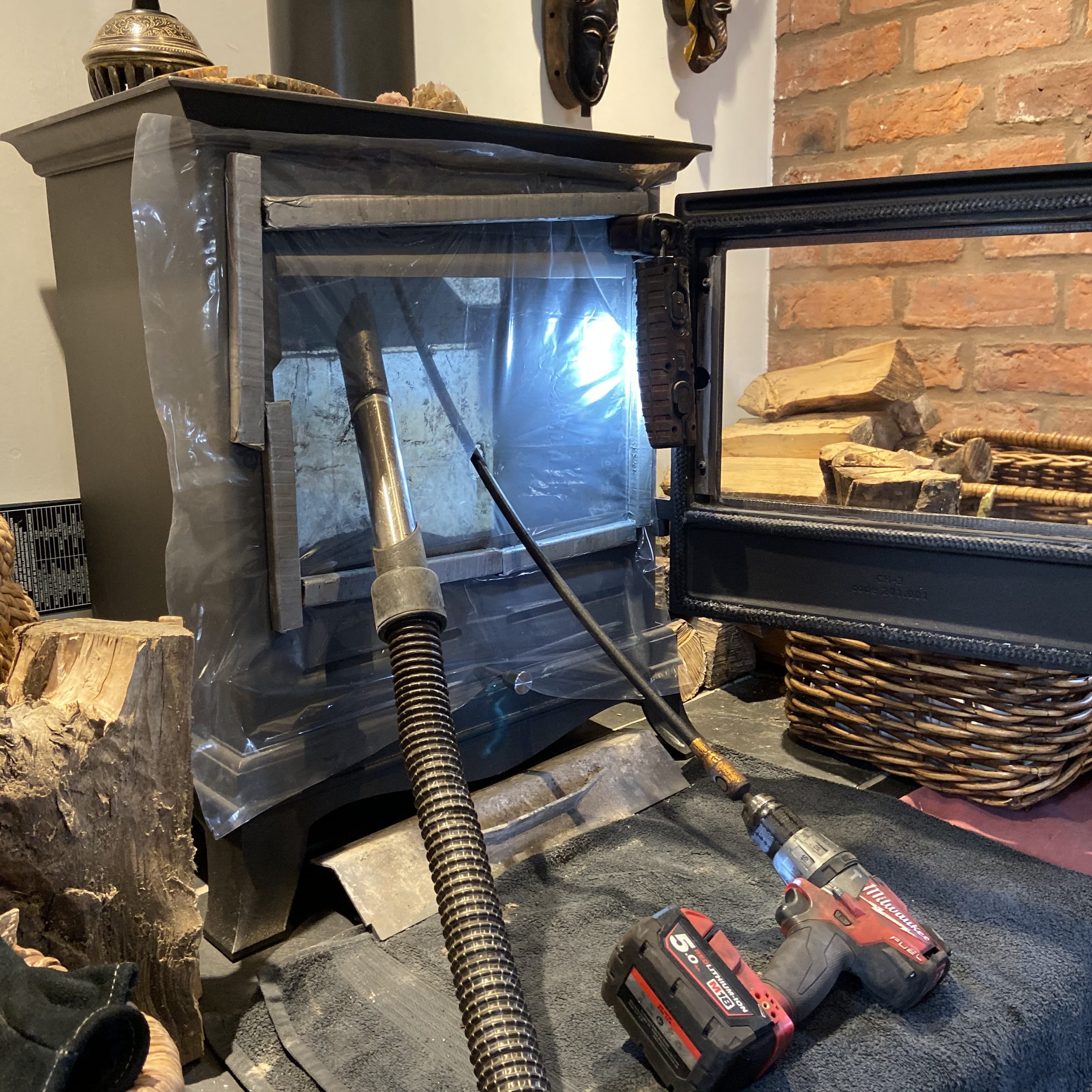 It’s been a busy year filled with small and large projects, and we finally got around to having our chimneys swept. Last year, we had new chimneys and flues put in and we got our local chimney sweep in to ensure that they were still AOK.

The good news is they were in great condition and the soot, according to the sweep, was very good which was indicative that we have been burning dry wood and not using our wood burning stoves as incinerators.

Incidentally, this is our first house with a fire, so it’s the first time we’ve seen a chimney sweep in action, and it was incredibly interesting.

The first thing they do is ensure that the house doesn’t get covered in soot, so a plastic sheet is placed over the stove once all the internal bricks have been removed. Then, two holes are made: one for the vacuum, the other for the motorised sweep.

The “sweep” is pushed up the flue using a series of extendable attachments until it pops out at the top of the chimney. It’s then connected to a drill which turns the sweep.

They then start the drill and it turns the sweep, and the soot and creosote dislodges and ends up in the fireplace.

Watching it turn was crazy.

With the flues cleaned and a thorough vacuum job with all the bricks removed, the stoves were reassembled. As part of the service, qualified sweeps should ensure that the chimney draws correctly and that the fire places are good to go with no smoke escaping.

To do this, they do a smoke test, and it was amazing to see just how well designed our wood burning stoves from Chesneys are. In this video, the sweep lit a smoker in our fireplace. It was pretty cool (the video needs a little time to spool – please be patient).

Of all the modern amenities in homes today, I still believe that stoves and fireplaces pose the greatest threat. With electrics and gas, there are cutoff mechanisms, but there isn’t anything like that for fire. So why take major risks?

Chimneys are a critical part of any wood burning system that allows smoke, toxins and dangerous fumes to escape the home. A clean chimney means your stove is safer and runs more efficiently using less wood.

One of our neighbours burn wood and heating coal as they’re quite remote. With all such fuels, a certain amount of creosote and soot residue stick to the flue every time you start a fire.

When the creosote gets too thick, heat and burning embers can potentially spark a fire in the chimney. This is exactly what happened to them. Fortunately, they were awake and identified the problem and shut off the oxygen supply to the fire, and the chimney fire went out. By all accounts they were lucky, because houses can catch alight from chimney fires.

So we’ve just had our chimneys cleaned and we’re going to get it done again in May after the wood burning season to get the creosote out the flues. We have learned that the creosote is acidic and with summer rains and moisture it can corrode your metal flue. That way, our fires are also ready to go when the temperatures drop in autumn.